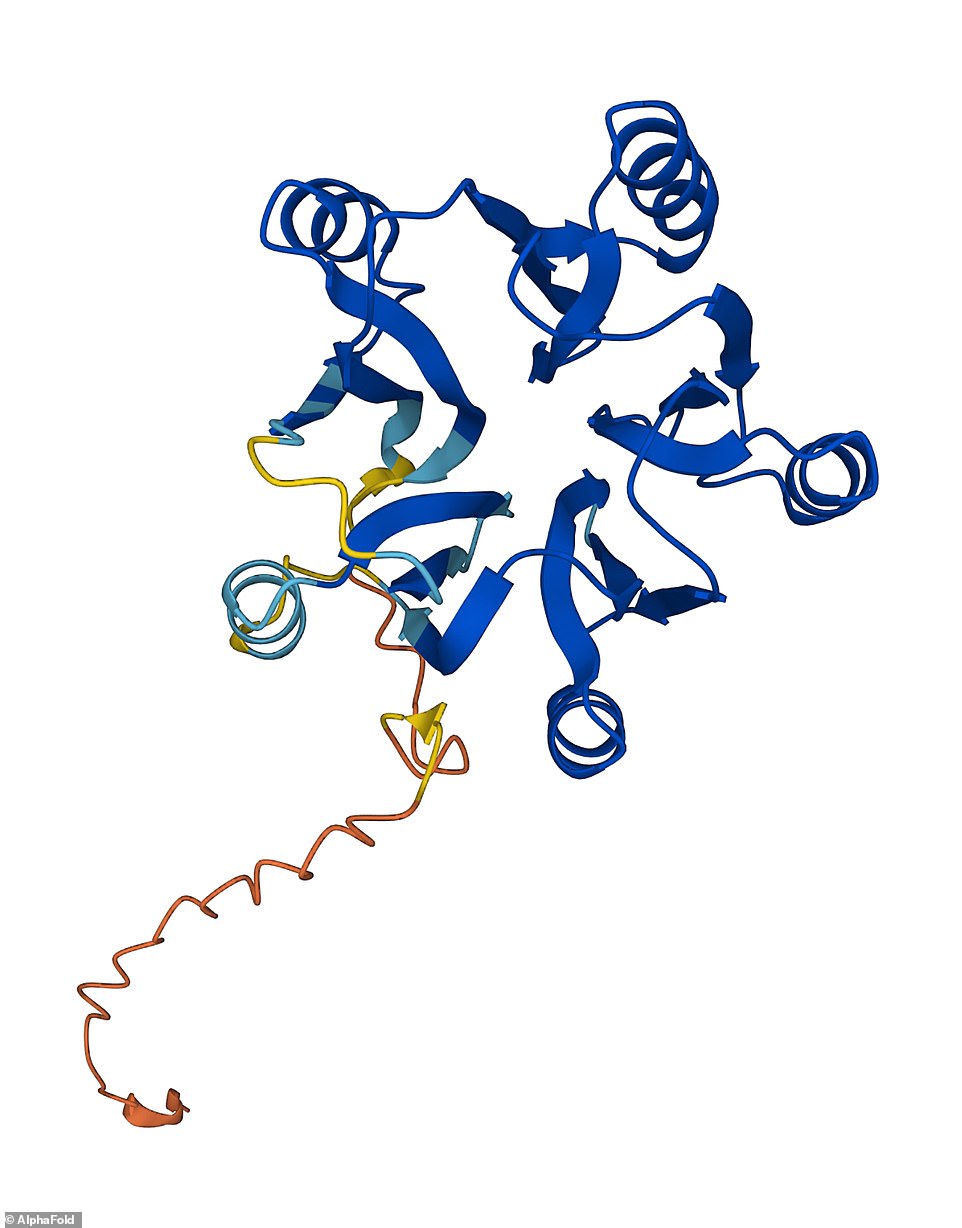 Google’s DeepMind artificial intelligence has revealed the 3-D structure of 200 million proteins that are contained in every living organism – enabling scientists to instantaneously access in-depth information on the building blocks of life.

Scientists used to spend many months or years to understand the structure of proteins prior to the AI program known as AlphaFold having solved one of biology’s most difficult problems in November 2020. Researchers often used tools like X-rays, but now that complex information is available as quickly as a Google search.

AlphaFold can predict the structure of almost all proteins – whether in animals, plants, humans, bacteria or other organisms – that are known to science. This ability to quickly see a protein’s structure in three dimensions is valuable for scientists seeking to cure diseases and researchers looking to solve problems like plastics pollution because it gives them a completely detailed look at the proteins that underpin all biological processes.

However, as with anything involving AI, this work has risks. A Nature study from March showed that scientists’ drug discovery algorithm could, with some minor tweaks, generate toxic concoctions like the VX nerve agent and other chemical warfare molecules.

Scroll down for video

Google’s DeepMind artificial intelligence can now reveal the structure of 200 million proteins that are the building blocks of life, enabling scientists to use that knowledge in a wide range of ways. Pictured above is F2OH23.2 protein, a plant protein that represents a potential new structural superfamily unlike anything seen before 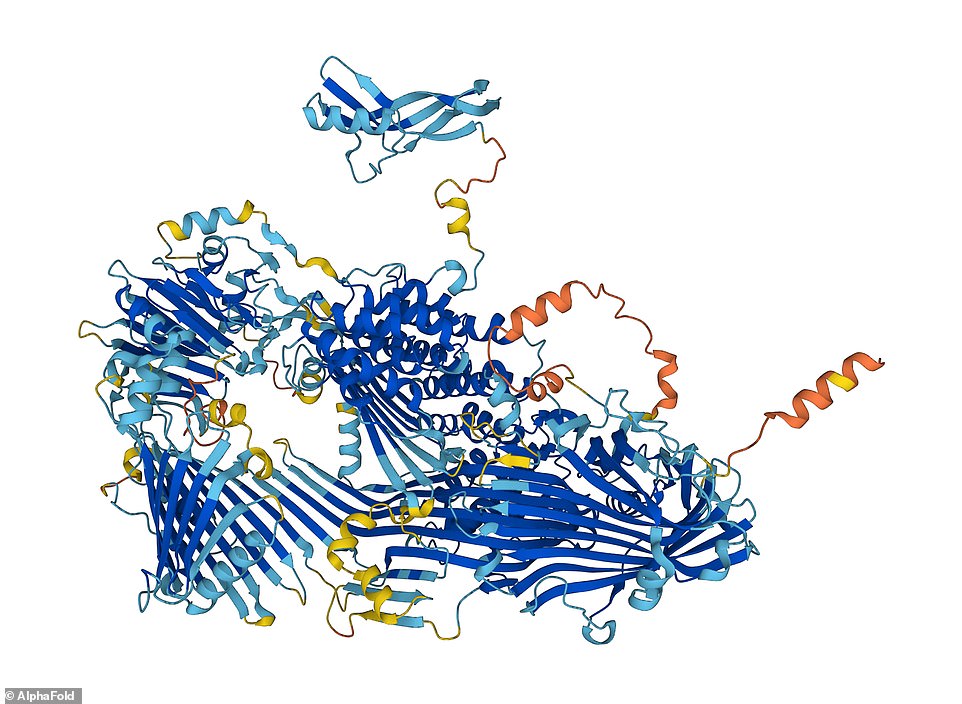 Being able to understand the shape of a protein allows researchers to determine how it works in the body and, for example, how effective certain drugs might be when interacting with it. Pictured above: Vitellogenin, a protein that’s involved in the immune system of egg-laying animals including honeybees 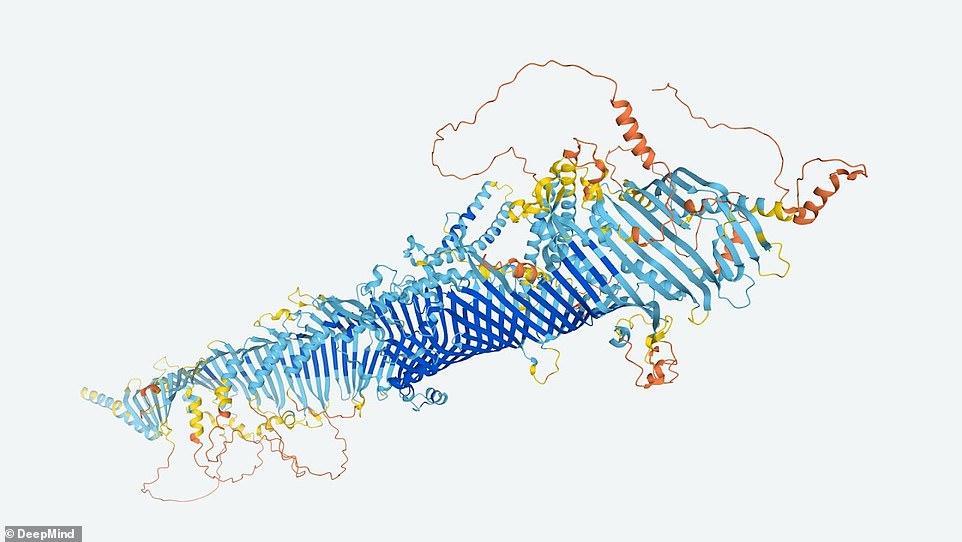 ‘It’s been so inspiring to see the myriad ways the research community has taken AlphaFold, using it for everything from understanding diseases, to protecting honey bees, to deciphering biological puzzles, to looking deeper into the origins of life itself,’ said DeepMind Founder and CEO Demis Hassabis

DeepMind claims it has followed a ‘responsible’ path by consulting with more than 30 experts across biology, ethics, security and safety so that the AI’s benefits could be shared in a way that minimizes potential risks.

Even so, numerous experts, including ex-Google AI ethics employee Timnit Gebru, have raised concerns about the technology’s potential to reinforce a concentration of power that results in discrimination.

Up to this point, over 500,000 researchers worldwide from 190 countries have used the AlphaFold database – to view more than 2 million structures.

‘It’s been so inspiring to see the myriad ways the research community has taken AlphaFold, using it for everything from understanding diseases, to protecting honey bees, to deciphering biological puzzles, to looking deeper into the origins of life itself,’ said DeepMind Founder and CEO Demis Hassabis in a Thursday statement. 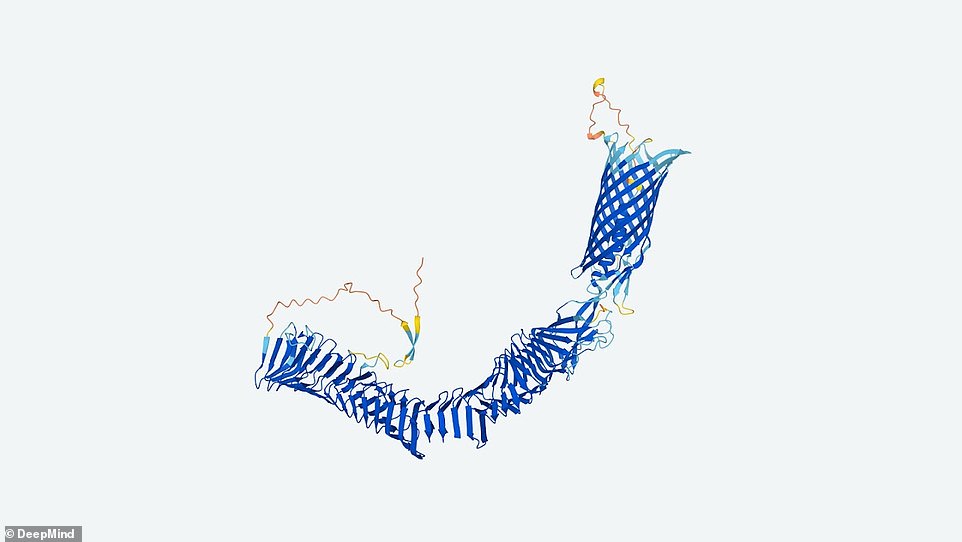 Up to this point, over 500,000 researchers worldwide from 190 countries have used the AlphaFold database – which includes the predicted structures for plants, animals, bacteria, fungi and other organisms – to view more than 2 million structures (like the one seen above) 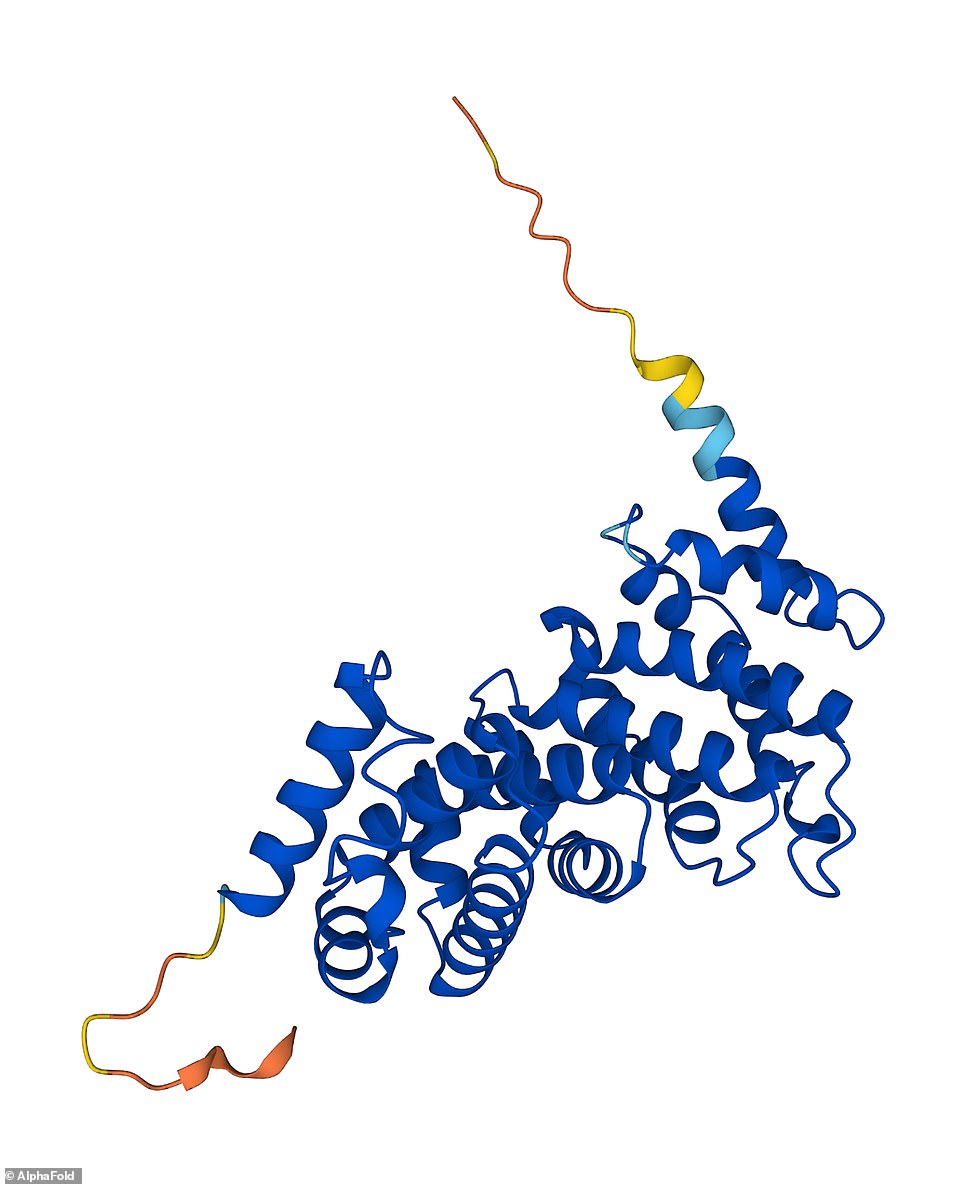 The new database could help anyone from scientists working on malaria vaccines to experts trying to solve ocean plastics pollution and researchers studying honey bee immunity. Pictured above is CCR4-NOT transcription complex subunit 9, a protein that regulates an important cellular process in human beings 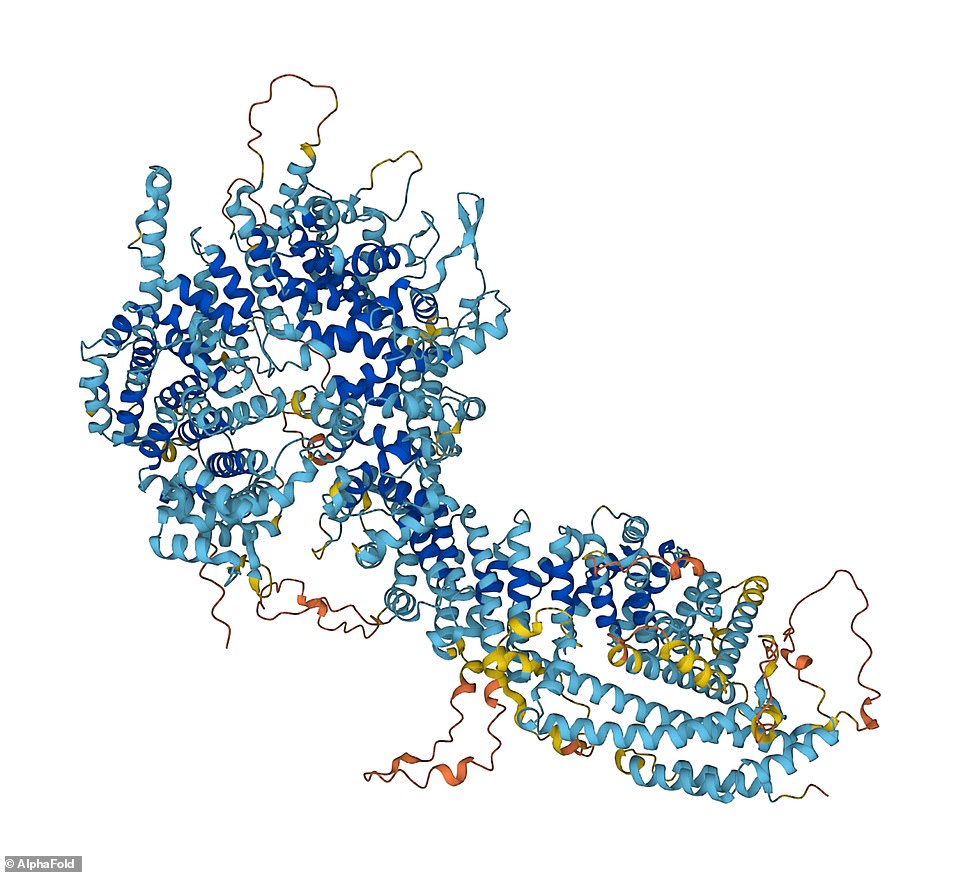 As with anything involving AI, this work has risks. A Nature study from March showed that scientists’ drug discovery algorithm could, with some minor tweaks, generate toxic concoctions like the VX nerve agent. Pictured above: Nuclear pore complex protein Nup205, which is part of a large complex that acts as a gateway in and out of the cell nucleus

The advancement announced is a collaboration between DeepMind, a UK-based subsidiary of Alphabet, and the European Bioinformatics Institute.

DeepMind was founded in London in 2010 and was acquired by Alphabet in 2014. It has offices in Edmonton and Montreal, Canada, Paris, and Mountain View, California.

In March 2016, DeepMind’s AlphaGo program defeated Go player Lee Sedol in a challenge match in Seoul. This moment demonstrated that the AI’s techniques were strong enough to tackle larger problems like protein-folding.

In December 2018, AlphaFold had its first public test of its performance and placed first in the rankings. Results were published in Nature and the team is expanded.

In November 2020, AlphaFold was recognized for finding a solution to the 50-year-old ‘protein folding problem’ that scientists had long struggled with by winning a competition and successfully predicting protein structures down to ‘atomic accuracy.’

On July 15, 2021, Nature published AlphaFold’s detailed methodology in the paper titled ‘High accurate protein structure prediction with AlphaFold’ and DeepMind then open sources the code along with 60 pages of supplemental information detailing the entire system.

One week later, Nature published another paper containing the predictions for the entire structure of the human proteome – meaning all proteins in the human body. DeepMind then launches the AlphaFold Protein Structure Database to give the scientific community free access to over 350,000 protein structures in total.

On July 28, DeepMind expands the AlphaFold Protein Structure Database from nearly 1 million to over 200 million structures.

‘AlphaFold is the singular and momentous advance in life science that demonstrates the power of AI. Determining the 3D structure of a protein used to take many months or years, it now takes seconds,’ said Eric Topol, founder and director of the Scripps Research Translational Institute, in a statement.

‘AlphaFold has already accelerated and enabled massive discoveries, including cracking the structure of the nuclear pore complex,’ he explained. ‘And with this new addition of structures illuminating nearly the entire protein universe, we can expect more biological mysteries to be solved each day.’

Finding a new drug that can heal an illness is painstakingly difficult – especially when trying to determine how different receptors – proteins that bind to the drug – work as a family. Meaning, scientists often want to find a drug or molecule that targets one member of that family but not all of them. That’s where AlphaFold’s capabilities can help.

‘This could accelerate drug discovery in a way that we’ve never seen before,’ Karen Akinsanya, president of research and development at Schrodinger in New York, said.

Plastics pollution – the world produces some 400 million tons of it per year – is one perhaps surprising area where AlphaFold could play a pivotal role. Scientists at the Centre for Enzyme Innovation at the University of Portsmouth are developing a unique solution, something they call a ‘fully circular plastic economy’ that would use enzymes, which are proteins that speed up metabolism, to break plastic polymers. That way, they could be 100% recycled back to their initial state – or even upcycled into material that has the quality of virgin plastic – instead of polluting the oceans.

‘One year after open-sourcing its AlphaFold Protein Structure Database, DeepMind and EMBL’s European Bioinformatics Institute are expanding it from nearly 1M to over 200M protein structures, covering almost every organism that has had its genome sequenced, a huge milestone,’ Alphabet CEO Sundar Pichai said on Twitter.

‘As pioneers in the emerging field of ‘digital biology’, we’re excited to see the huge potential of AI starting to be realised as one of humanity’s most useful tools for advancing scientific discovery and understanding the fundamental mechanisms of life,’ Hassabis said.

Although DeepMind has prided itself on the database being open-sourced to allow scientists broad access, the company’s founder admitted during the announcement to reporters that they may need to restrict access in the future.

‘Future [systems], if they do carry risks, the whole community would need to consider different ways of giving access to that system—not necessarily open sourcing everything—because that could enable bad actors,’ Hassabis said.

‘Open-sourcing isn’t some sort of panacea,’ Hassabis added. ‘It’s great when you can do it. But there are often cases where the risks may be too great.’ 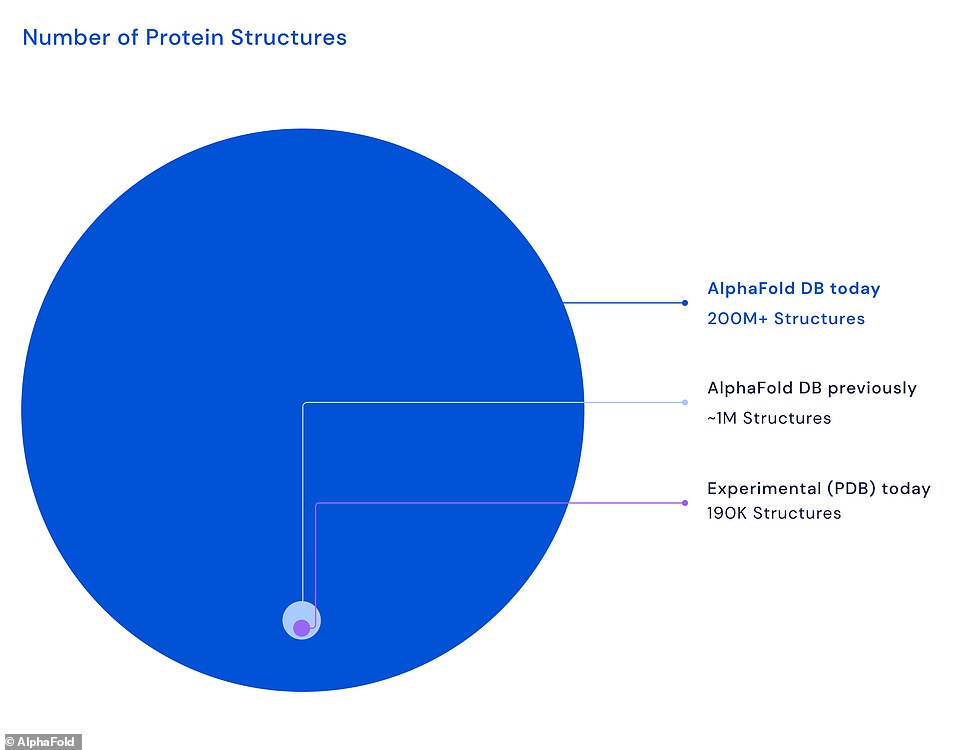 Today’s announcement shows that, thanks to AlphaFold, researchers have access to a much higher number of protein structures for their work 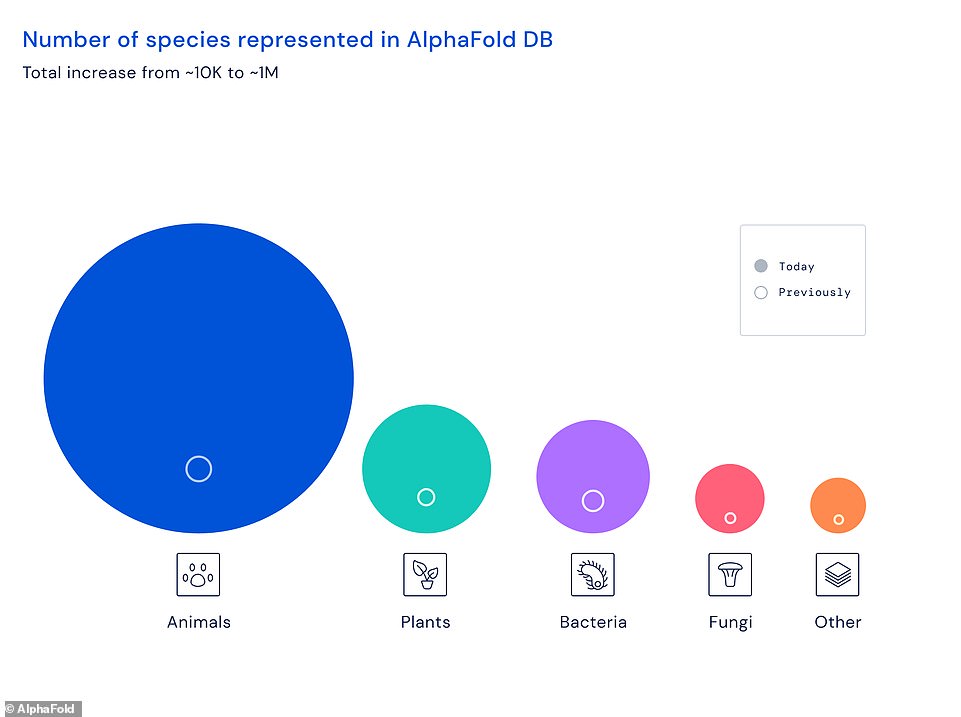 The AI’s work isn’t without risks, as experts fear these types of programs could be misused. The latest update includes the predicted structures for animals, plants, bacteria, fungi and more (as seen above)